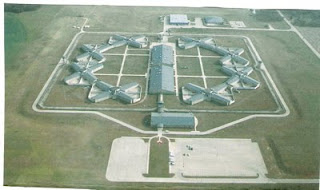 This week, the governor of Illinois announced that the supermax facility in Thomson has been offered to the federal government to house the detainees now held at Guantanamo Bay. Thomson is located near the border of Iowa in northwest Illinois, and the newly built prison was ready to be opened in 2000. There were plans and talk of transferring prisoners from Menard, Pontiac, and Stateville for years, but it remained empty until a few years ago when a small contingent of minimum security prisoners were transferred there.

Construction on the Thomson prison began when state lawmakers were pursuing an extreme, though politically expedient, get tough on crime policy. Truth in sentencing, and other laws were passed to drastically increase the time served by convicts. Illinois built, and quickly filled several new prisons during that time. However, at the turn of the century, it became apparent the state could not continue to build enough prisons to keep pace with all the people being incarcerated with long sentences and no hope of parole. Furthermore, the cost of an expanded prison system was consuming revenue from state coffers at the expense of other programs and projects. Today, when Illinois is in enormous debt and tax revenues continue to fall, it makes sense for Governor Quinn to sell Thomson.

Thomson cost the state millions to build, and even with it sitting empty, it costs over a million a year just to maintain. For years, constituents of Illinois have been angry that a more efficient and brand new prison sits empty while Stateville, that is over 100 years old, decrepit, corrupt, and costly to maintain, continues to operate. The small town of Thomson could also certainly use the jobs and uptick in their economy. It made a lot of sense to close Stateville, and transfer its inmate population to Thomson. However, what makes perfect sense does not always make political sense.

For many years, former Governor Blagojevich sought to close Stateville, and open Thomson. The guards at Stateville, however, have a powerful union, and this union along with certain key state politicians, fought tooth and nail to keep Stateville open. The union allowed guards to take days off work to protest in Springfield, the state capital. Guards would even try to enlist support from visitors at Stateville. It was odd how the guards could be much more friendly when they wanted something. Before Springfield administrators and auditors toured Stateville, the prison would be quickly painted and cleaned. Ultimately, political deals were made behind the scenes, and Thomson continued to stay vacant.

There are rumors that the Roundhouse will be closed by the end of the year at Stateville. Since 2000, little by little, cell houses have been shut down. First it was the Honor Dorm, which housed well behaved inmates who had jobs. Then, I House and H House were closed. I House was condemned by the federal government for years. The building had major electrical, plumbing, and heating problems. It also was infested with cockroaches that no pest control service could eradicate. The cockroaches were so bad in certain wings, the walls would seem to move at night. It reminded me of the movie "Creepshow" and roaches would crawl on you in your sleep, and even in the light when you were awake if you were not paying attention. I have heard many prisoners tell me that roaches got into their TVs, radios, and even their ears. It is good that I regularly use headphones and earplugs at night.

The transfer of enemy combatants and terrorists to Thomson has ignited much controversy. Republican congressmen from Illinois quickly condemned our governor and president. They claim bringing detainees from Guantanamo Bay to Illinois will endanger the townsfolk of Thomson, population 500, along with the rest of the state. Illinois will become a target of terrorism, if you listen to the critics' rhetoric. Willis Tower, formerly Sears Tower, nuclear facilities, and sporting events could be bombed as well as other sites. These arguments are without merit, and I continue to be annoyed by politicians' attempts to scare the public.

The threat of Al Qaeda is, and always has been overblown, and used to pursue political objectives. The 9-11 attack, although catastrophic, was an unsophisticated, crude, and easily preventable attack. Those that were behind the plane hijackings were a small fringe group of radical Islamists. The mass media sensationalized the Twin Towers' collapse, and the Bush administration took advantage of public emotion to take away American freedoms, declare wars, and expand an already intrusive government.

I believe in a strong military and foreign intelligence agency to be used to defend and protect our clear national interests. However, special forces and strategic missile strikes could have destroyed Al Qaeda leadership and any budding nuclear program in Iraq. An invasion force to bring democracy to these states was unnecessary, and unwise. To prevent further terrorist attacks like 9-11, cockpit doors could simply have been secured. America faces little threat to religious radicals who live in caves and its only means to attack the USA was by using a commercial airplane as a missile. There are much larger threats to the United States such as rising superpowers.

Not only does the town of Thomson face little or no danger from incarcerating Al Qaeda members, but there is little to no chance of an escape. The supermax prison is one of the most secure prisons in the U.S., including the federal supermax that already houses other identified terrorists and dangerous criminals. I have spent time in similarly designed buildings such as the closed H and I House units at Stateville. I have also heard much about Thomson from newspaper and TV news reports.

Each cellhouse at Thomson is built on an X design with four wings of cells, and a secured control room in the middle. The cells are not stacked on top of each other like where I live now, and although there are two floors, they are divided. Other than for visits, which I do not believe Guantanamo Bay detainees will be allowed, they will never leave their wing. Showers are on the wing, and food is brought to inmates in trays which are pushed into a chuck hole in a solid steel door. The chuck hole has a door which is only unlocked to feed. If the accused terrorists are given recreation, it will consist of being let out of a door outside their wing, and into a small concrete court. The court is walled, and has razor wire. There is also a security camera focused on the court, as there is everywhere you go in Thomson, except inside your cell. The cell has a concrete slab for a bunk, and there are no bars. It will be difficult for those detained there to communicate with others on the wing, and they will have to shout at the bottom of the doors. They will also probably resort to shooting tightly folded letters ("kites") underneath the door to be fished by the receiver. The outside perimeter of Thomson has no high walls like Stateville, and one on the outside can see the prison cell houses. However, the absence of a 30 foot wall does not make the prison any less secure. Two tall fences with razor wire go around the penitentiary. One is electrified with near fatal electric current. The perimeter also has motion and pressure detectors as well as gun towers.

Despite the lack of movement, isolation, and increased security, I would much rather be at Thomson than Stateville. In fact, I will be jealous of the members of Al Qaeda if they are indeed transferred there. Thomson is a brand new prison; it is clean and does not have problematic plumbing, electric, or heating. Although the prison does not have windows that open, it does have air conditioning in the summer. The cells at Thomson are not open with bars to allow screaming and banging, or blaring radios and TVs to disturb me day and night. The wings are not long, and an inmate would not have many people to bother him anyway. As I listen to numerous prisoners yelling over each other, I think of the blissful quiet I could be enjoying at Thomson. Finally, the best part of living at Thomson would be not to have to share a bathroom-sized space with another person. Every time there was talk of opening Thomson to maximum security state prisoners, I quickly told my counselor to put me on the list. It seem that I will never get there now.

Although I see no controversy with moving detainees to Thomson, I find it ironic that President Obama is more concerned with the rights, fair trials, treatment, and living conditions of these foreign terrorists than with U.S. citizens. Why is it that a member of Al Qaeda should not be water boarded or harshly interrogated in the name of national security when U.S. citizens are routinely mistreated and abused during arrest and interrogation? Why is it that a member of Al Qaeda is to be assured a fair trial with all the rights and safeguards of our Constitution, but many of our own citizens are not, and are convicted although innocent? Why is it that members of Al Qaeda are to be incarcerated at a brand new penitentiary with better living conditions than those at Stateville, or any number of other prisons? Those at Guantanamo Bay are not U.S. citizens, and should not have Constitutional rights. They are foreigners, enemy combatants, and terrorists. It is time Americans began thinking about our own country, justice system, and its incarcerated citizens, and not the perceptions of the global community.
Posted by Paul Modrowski at 10:50 PM 7 comments: