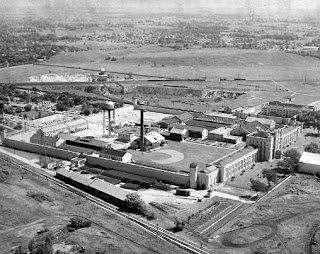 As I write this entry, I can hear the rumble of firecrackers in the distance. In years past, I could also see hazy fireworks displays through the dirty prison cell house windows. This year, however, there is nothing to see, and it is raining. That is just as well. I find the celebration of our country's freedom quite ironic from within these prison walls. In fact, even if I were not in this oppressive prison, I would find this celebration of freedom to be ironic.

At one time, Americans did have reasons to rejoice. America was once the greatest free nation on Earth. The colonists had broke away from the yoke of oppressive British rule which treated them as subjects, and overtaxed their trade. The sovereign United States grew in size to encompass the vast land from "sea to shining sea". Despite this massive growth, rugged individualism and freedom prevailed, and government stayed minimal and mostly out of the affairs of men. A robust culture, with strong values, emerged in the new world from the nations of Europe. Up until the late 20th century, taxes were minute, laws were kept to a minimum, crime was low, and the incarceration rate was a trifling. There was a death penalty as well as corporal punishment, but sentencing statutes were short terms. Americans could truly boast and be proud that their nation was the "land of the free, and home of the brave". Today, 233 years after colonists declared independence, this country is radically different.

My mother, who is an accountant, has figured out that after paying federal, state, and local taxes, including real estate taxes and an assortment of sales taxes, nearly half of her and my father's income goes to the government. I imagine what those who participated in the Boston Tea Party would think of that. Incredibly, there continues to be a push to raise taxes further at all levels of government. Even in prison, inmates are not immune from the government's growing appetite for revenue. Legislation in Illinois allows the state to seize money and assets of prisoners to pay for their own incarceration. Lawsuit monies won by inmates for such things as the denial of medical care, being assaulted by guards, or unsafe and unsanitary living conditions, are also seized. Our prison commissary prices are jacked up 25% to go into IDOC coffers, and prison workers' paltry earnings are also cut into. It is a twisted system that makes prisoners pay for their own punishment, and the expenses of the prison industrial complex.

In the last 25 years, the prison population has grown almost exponentially. A year ago, I read that the U.S. had over 1% of its population in prison. This statistic failed to include those in jails, on home monitoring, in a work release program, or on parole or court supervision. I reason if these people were included, the percentage would be 5%. That means one out of every twenty Americans has had his or her liberty curtailed in some fashion! I sometimes joke that soon half the population will be locked up, and the other half will be staff to guard them, but it is no joking matter. America has more people incarcerated than Red China, the former Soviet Union, or any government in the history of mankind.

People are being ticketed, arrested, and convicted for laws and crimes that at one time did not exist, or the common law forbade. For example, the felony-murder law, or murder by a theory of accountability. Any time a person engages in a felony with another, and a person is killed in the course of that felony, automatically everyone involved in the felony is guilty of murder even if they did not commit the murder, had no intent for a murder to occur, or any knowledge that one was going to occur. There is a case where a man drove a friend to the end of a city alley, and the friend got out of the car and walked half a block away. Then he mugged a person who happened to be a Chicago cop. The cop shot the mugger dead, and incredibly, the man who drove him was charged and convicted of 1st degree murder.

I can also relate the story of a teenager who allegedly lent his car to a friend who used it to take a person to a secluded location where he killed him. The teenager was convicted of murder, and given a natural life sentence without any possibility of parole, despite the fact that the actual perpetrator was acquitted and went home a free man. Yes, this adolescent was once me. I, and countless other people across the U.S., are in prison because of laws such as these that never existed a few decades ago.

Not only are more laws being added, but sentences are being increased. For example, the crime of murder in Illinois once was an indeterminate sentence where even a life sentence would be eligible for parole in 12 years. This sentencing scheme was done away with for predetermined sentences ranging from 20 to 40 years. With good behavior, an offender only had to do half of his sentence. In the late 1980's, the sentencing range was increased to 60 years, and numerous aggravating factors were added that permitted even longer sentences, including natural life without parole. Around the turn of the century, a bill called "Truth in Sentencing" was passed which mandated all convicted murderers to do 100% of their time. Hence, we now have thousands of people in the IDOC that will never be free. Readers may not by sympathetic to murderers, but sentencing laws have increased across the board.

As a child, I read the book "1984" by George Orwell. At the time, I thought of it as a book of fantasy, but over the years, I have come to believe it was, in part, a prophetic vision of our future. The all invasive and oppressive Big Brother is here, and not just in the confines of Stateville. Even outside these walls, I have learned of cameras going up everywhere to watch citizens. Government also tracks your spending, your Internet movements, and eavesdrops on phone calls. President Obama wants not only nationalized health care, but a massive data base of everyone's medical records. The police, and your elected legislators, tell you what you can and cannot do, and the mass media heavily affects what you think. I wonder if someday in the future, if I am ever released, I will only be going from one prison to another. Perhaps it will be like a transfer to minimum security.